As Queensland celebrates its 160th birthday this year, we’re shining the spotlight on a time throughout history where Queenslanders banded together, the First World War.

Each year Queensland Day on 6 June marks the official separation from New South Wales as an independent colony. One of the most significant historical events to rock Queensland was the First World War in 1914. Today we look at items on display at the Anzac Legacy Gallery which serve as a reminder of challenging times for the state, sacrifice and comradeship.

Could you imagine seeing this Army recruitment poster in the streets and enlisting into the army at 18 years old? This was the reality for nearly 58,000 Queenslanders, and more than ten times as many civilians who supported their war efforts back home. The poster shows two maps; one of south east Europe and the other focusing on the Gallipoli area. The poster reads “Queenslanders your country calls” along the top and “We’re coming lads hold on!” in bottom right hand corner.

This nurse’s cap is homemade and belonged to Voluntary Aid Detachment (VAD) member, Miss Evelyn Drury. The primary role of a VAD member was that of nursing orderly in hospitals, carrying out menial but essential tasks – scrubbing floors, sweeping, dusting and cleaning bathrooms and other areas, dealing with bedpans, and washing patients. They were not employed in military hospitals, except as ward and pantry maids; rather, they worked in Red Cross convalescent and rest homes, canteens, and on troop trains.

These referenda held at the height of the First World War established the principle that there would be no conscription for the armed forces during that conflict. They were remarkably divisive and demonstrated an Australian popular refusal to accept compulsory membership of the armed forces, which was at odds with the vast numbers who had joined up voluntarily. 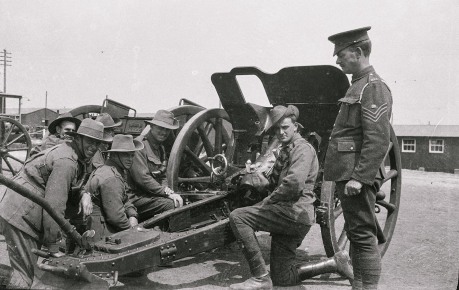 The Anzac Legacy Gallery is a permanent exhibition on level 1 of the museum and explores the stories, objects, and journeys that trace how the First World War changed the face of Queensland and continues to shape our lives, a century later. The gallery is summarised into three major thematic areas, Queensland at War, The Story of Mephisto and Queensland Remembers and features more than 500 objects and 200 personal stories.