In ancient Egypt, a wide variety of animals were mummified. Household pets could be interred with their masters so they could be together in the afterlife; joints of poultry and meat were wrapped in linen and placed in tombs as food offerings (victual mummies), while sacred animals were worshipped during their lifetime and mummified upon their death. The most common animal mummies were ‘votive’ mummies, dedicated as offerings at shrines of specific gods to whom the animals were sacred. Animals used as votive offerings were mummified in their millions in Ancient Egypt, and kept in necropoles that were associated with tombs or cult centres of gods. Hence, a cat might be offered to Bastet (Goddess of Love), an ibis to Thoth (God of Wisdom, often depicted with a human body and ibis-like beak), or a falcon to Horus (God of the Sky, and often depicted as a falcon). Once each area was full of votive animals, it was sealed. Although this custom occurred through most of Egyptian history, the industry of systematic production reached its peak in the Late Period (ca. 664-332 BCE) and continued into the Roman Period (ca. 30 BCE – 395 CE).

Although there are a wide range of animal mummies, perhaps the most common were birds, particularly what are commonly called ‘hawk’ or ‘falcon’ mummies. Sacred to Horus, the falcon was thought to be the guardian of the ruler, and is frequently found spreading its wings protectively behind the head of the Pharaoh. The majority of falcon animal mummies have been identified as the Common or European Kestrel (Falco tinnunculus), while Sparrowhawks (Accipiter nisus) have also been identified in collections worldwide. Ibis mummies are the Egyptian Sacred Ibis (Threskiornis aethiopicus).

There is variability in the form of mummified bird offerings in Ancient Egypt. While complete animals were often mummified, there were also offerings comprised of incomplete animals. When analysed via X-Rays, some beautifully wrapped animal mummies sometimes turn out to be nothing more than bundles of cloth and feathers, with sticks and stones or pottery sherds added, to simulate the feel and weight of a mummified bird.  Scholars have wondered why animal mummies are so variable. It is possible that a deliberate practice of ‘faking’ animal mummies for religious offerings was common, for the simple deception of pilgrims, or as an alternative for those wishing to make a ‘cheaper’ gift to the relevant god. People may not have known that their votive offerings held no remains. Perhaps partial offerings were as potent as a complete bird, and Priests conducted rituals to transform them. To investigate whether the Queensland Museum animal mummies were ‘real’ or ‘fakes’, staff took the animal mummies to be X-Rayed. To our relief it was confirmed that all the animals in the collection were in fact the genuine article – complete votive offerings of birds. The X-Rays also revealed the slightly different poses of the birds themselves, held within their eternal wrappings.

Queensland Museum holds four animal mummies of Falcons, and one of an Ibis. These were acquired by donors around the late 1800’s to early 1900’s, likely purchased from Egyptian dealers as souvenirs and curios while visiting or working in Egypt. Dealers often had played a role in removing these offerings from their original contexts, and their important roles within the Ancient Egyptian belief system. Unfortunately, this practice was once commonplace, although not condoned today. This practice also leads to a lack of provenance information. Although we do not know exactly where these animal mummies were from in Ancient Egypt, millions of Ibis have been found in the catacombs of Tuna el-Gebel and at Saqqara, and Falcons at Abydos. Each of the Museum’s animal mummies is wrapped in strips of linen, with the darker stains left by oils and resins. Several of the mummies show signs of people’s curiosity, evidenced by the unwrapping or linens or their being cut away to reveal the body of the bird.

One mummified falcon came as part of an exchange in 1903 from Professor E.M. Crookshank. Professor Crookshank was a noted British bacteriologist, best remembered for his role in the vaccination debate of the late 19th century. He visited Australia briefly in 1902, and via correspondence, arranged for an exchange. In return for many Egyptian antiquities, including one mummified falcon, the Museum provided the skins of 13 mammals and 20 birds from Australia and New Guinea. The falcon received from Crookshank presents a mystery as some of the linen wrappings have been cut away on the thorax (chest) of the bird, and remnant gold leaf can be seen. Some animal mummies have gold leaf applied to the outer linen wrappings. Animal mummies with gold applied to their bodies seem to be very rare. Given that the gold would never have shown under the wrappings, it may suggest the linen was cut away and the gold added by a dealer, perhaps to enhance its value to a collector. 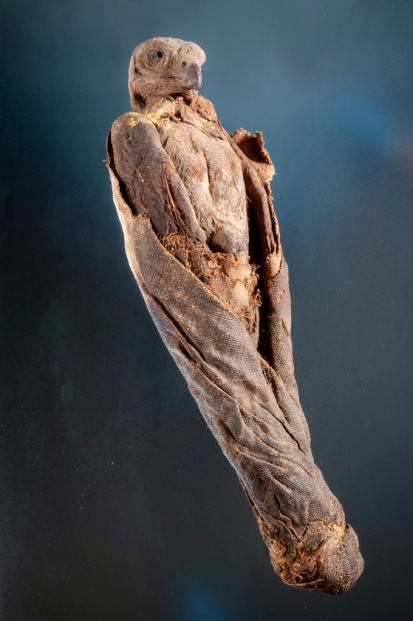 Two mummified falcons were purchased from the Brisbane Antique and Art Centre in 1973. While it’s safe to assume they were mummified in Ancient Egypt, how they came to be in Australia is not known. 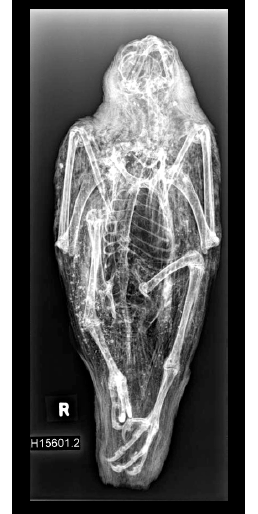 The last animal mummy is believed to be that of an Egyptian Sacred Ibis (although its beak looks more like a duck!). This may have been exchanged by the Egyptologist William S. Loat in 1913 for ethnological specimens. Ibises were sacrificed in the millions, wrapped in linens and placed in sealed pottery vessels, and interred. The scale of this offering industry has led researchers to consider how such large numbers were maintained – were Ibises intentionally bred? In this case, collection objects can sometimes be useful in helping to answer modern-day research questions. A sample of the linen and tissue from the Ibis was submitted for DNA analysis as part of a large research project by palaeontologist Sally Wasef of the Australian Research Centre for Human Evolution at Griffith University. Genetic diversity may suggest a non-captive population, while a less-diverse one may suggest breeding. Unfortunately, the sample from the Queensland Museum Ibis did not yield viable results for the study. However, the study did find that ancient mummified birds were genetically similar to present-day wild populations in Africa, suggesting Ibises were not bred in large farms. Other researchers have suggested that Ancient Egyptians may have encouraged flocks to stay longer in a particular area or time of year, and obtained them that way. Falcons on the other hand, have been suggested to have been intentionally bred. Worldwide, work is being conducted in the field, in labs and in Museums, to understand more about these important cultural items.