Most of us are all too familiar with the plights of large and charismatic species such as the tiger, black rhinoceros, giant panda and polar bear. Their iconic status and magnificence are synonymous with the international conservation movement, as their continued existence on planet Earth remains so dependent on the concerted efforts of citizens and governments.

In Australia, our emphasis on threatened species is likewise focused around vertebrate animals and plants with the highest of public profiles: mammals like koalas, bilbies and Leadbeater’s possums, birds like night parrots and cassowaries, and plants like the Wollemi pine. These species are undoubtedly deserving of our affection and conservation, and play an important role in shaping the Australian public’s environmental consciousness.

But threatened species come in all shapes and sizes, and conservation biologists are slowly, but surely, adding more and more invertebrate animals to our national and state threatened species lists. This is not just an esoteric exercise – insects, spiders, snails, crustaceans and other invertebrates are crucial to the functioning of all terrestrial ecosystems, and we are realising all too quickly (and possibly far too late) that they are not immune to the devastating impacts of the Anthropocene – impacts like land clearing, climate change, pollution and the gradual destruction of the natural world.

The recent devastating fires during Australia’s 2019/20 ‘Black Summer’ took a distressing human and environmental toll. On Kangaroo Island, intense fires ripped through large swathes of the island, exacting damage which was shocking even by Australia’s harsh fire standards. Unsurprisingly, iconic species such as the Kangaroo Island dunnart, glossy black cockatoo, southern emu wren and southern brown bandicoot were all front of mind – and rightly so – as vast swathes of their habitat were reduced to ash. But Kangaroo Island is also home to a remarkable invertebrate fauna, with large numbers of species found nowhere else, and many with significant evolutionary connections to other parts of southern Australia, and even to other continents.

One such species is the Kangaroo Island assassin spider (Zephyrarchaea austini), newly discovered in 2010, and described by myself and other museum scientists in 2012. Assassin spiders or ‘pelican spiders’ are remarkable for myriad reasons, not least their evolutionary antiquity (dating back to the Jurassic), their unusual pelican-like appearance, and their Gondwanan distribution as relicts from a time when southern Africa, Madagascar and mainland Australia were connected. Assassin spiders also live in complex understorey food webs, where they are important predators of other spiders. The Kangaroo Island species is known only from the Western River Wilderness Protection Area, in the north-west of the island. The spider itself is extremely small, extremely rare, extremely fussy in its choice of habitat, and it has an extremely limited ability to move around the landscape. These characteristics make it (and indeed all assassin spiders) inherently susceptible to fire, and during the 2019/2020 fire on Kangaroo Island, its entire known habitat was wiped out.

Concern was raised at the time for its continued survival, and that concern has not dissipated in the months since the fire. Preliminary surveys suggest the impacts on the Western River region were particularly severe, and no assassin spiders have been seen despite a number of preliminary searches. Its continued existence remains unlikely at best, with further detailed survey work required, both in the short and the long terms.

The case of the Kangaroo Island assassin spider is an important example of how threats to the natural world can impact biodiversity across the taxonomic spectrum, not just those species which are large, obvious or iconic. We are yet to scientifically document the majority of the Australian invertebrate fauna, and research museums like the Queensland Museum have a vital role to play in this respect.

Most importantly, we must all remember that small and seemingly insignificant spiders, insects and other invertebrates provide ecosystem services which are far more substantial than their size would suggest; they are, as one of the world’s most famous biologists Edward O. Wilson so famously stated, “the little things that run the world.”

We will continue to search for the Kangaroo Island assassin spider, and in the meantime, let us not forget the “little things” this International Endangered Species Day. 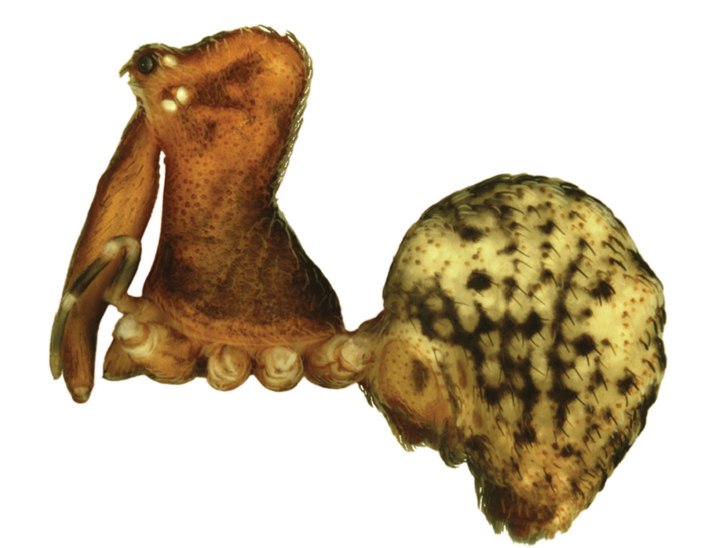 Preserved female specimen of the Kangaroo Island assassin spider (Zephyrarchaea austini), lateral view, with legs removed. This is the only known photograph of this extremely rare species. Image by M. Rix.

Live male Zephyrarchaea robinsi, lateral view. This species, which is closely related to the Kangaroo Island assassin spider, is known only from the Stirling Range in Western Australia, where it too was impacted by devastating fires during the summer of 2019/20. Image by M. Harvey.