Have you ever seen a more adorable spider? These cute and colourful jumping spiders are changing the reputation of arachnids around the world. 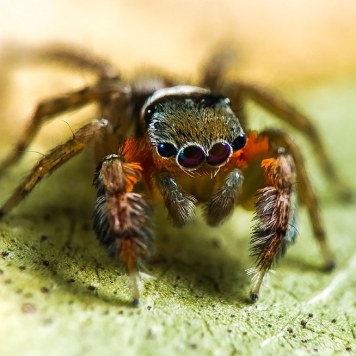 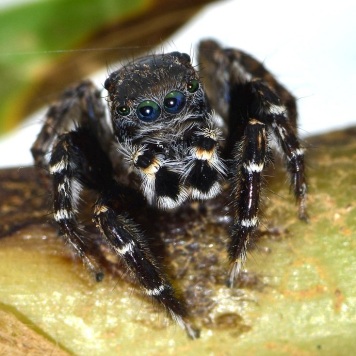 Four of the five new species are from Queensland with one from New South Wales. At only a few millimetres in size, they can be difficult to spot, despite their stunning colours.

Dance like your mate is watching
The spiders are known as Brushed Jumping Spiders due to the elaborate mating dance of the males, which involves a brush of long and often colourful setae on their legs (like butterflies).

Joseph Schubert said the colour patterns in the males are species-specific and range from black and white combinations to extremely colourful morphs featuring iridescent turquoise and orange patterns.

“The males perform unique dance rituals with their brilliantly decorated first pair of legs to attract females,” Mr Schubert said. “These five new species are close relatives of the Australian peacock spiders which also perform courtship dances for females. This courtship behaviour makes them a crowd favourite and has popularised jumping spiders worldwide.”

“Jotus karllagerfeldi is a black and white spider which we looked at and instantly thought of Karl Lagerfeld and his signature look, as the spider has large black eyes, which reminded us of sunglasses and its black and white front legs were reminiscent of Lagerfeld’s kent collar,” he said.

Remember to share you visit with us on social media by using the tag #DiscoveryQM and #myqldmuseum.