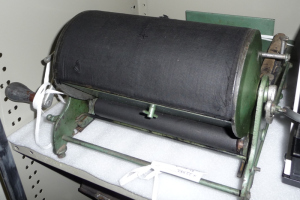 What did teachers do before photocopiers?

Prior to the commercialisation of the photocopier, many schools used a duplicator.  There are two types of duplicator, a spirit duplicator which uses a multi layered, ink impregnated wax based master copy and a mimeograph which uses a single layered waxed paper master copy.

To prepare a spirit duplicator master a teacher would write or type onto the top sheet. The pressure applied would transfer some of the wax from the bottom sheet onto the back of the top sheet.  This wax, which was impregnated with ink, usually aniline purple, would form a “negative” image of the back of the original document.  The negative would then be wrapped around a drum. Spirits would then be applied to the paper which would dissolve a little of the ink in the wax as it came into contact with rotating negative.  This dissolved ink would dry on the paper, forming a copy of the original.

A Mimeograph uses a single sheet of waxed paper.  When the paper was typed or written on, the wax would be dislodged creating a stencil through which ink could be passed.  Once the stencil was complete, it was placed on an ink filled drum.  When paper was forced between the drum and a roller, ink was forced through the stencil onto the paper forming the copy. 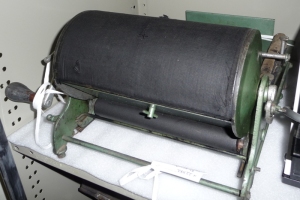 So why would Queensland Museum keep an example of a mimeograph?  Prior to World War II, these sorts of duplicating machines were imported from the United States.  With wartime restrictions on shipping, the supply of these machines ceased, yet the demand grew. A Brisbane stationary company and importer of mimeograph machines, Jackson & O’Sullivan, saw this as an opportunity and started to produce their own version, “The NATIONAL” duplicator.  Different components were produced around Brisbane with the final assembly taking place on the fifth floor of the company’s Queen Street premises. The duplicator was a sales success with examples even purchased by the United States Navy for use in the Pacific theatre.

Unfortunately, like a lot of Australia’s wartime manufacturing industries, production of “the National” mimeograph ceased after the war as trade re-commenced and products from around the world came back onto the market.

For more ideas and resources to teach science and technology in the classroom visit QM Loans. Loans kits include Telecommunications, Early Queensland Living and Australian Inventions.

One thought on “Behind the Scenes: The Mimeograph”