When I started work at Queensland Museum Network two years ago, little did I know that a newly acquired object in a safe at Hendra, would trigger research into a new area, one that has fascinated me for many years. 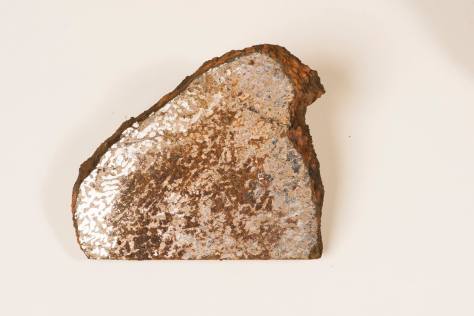 The object, a mass with a flaky, rusty crust, about 20 centimetres across and weighing more than 15 kilograms, had been brought in for study by a couple who had been fossicking for gold in North Queensland, near Georgetown. Using a metal detector, they had found a substantial piece of metal buried more than a metre beneath the surface. It was not gold. They wondered if it was a meteorite.

The first clue occurred during retrieval when hammering had broken off some rust and showed a grainy, crystalline texture in the metal underneath. Slow cooling over millions of years creates large metal crystals in many iron meteorites, something not found in a man-made artefact. True identification of a meteorite requires a petrological microscope or an electron microprobe that examines its characteristics. The only hitch was that the meteorite needs fresh material to be exposed. I asked the discoverers if they could saw off an end piece and also a thin “bread slice” for further research, which they did. 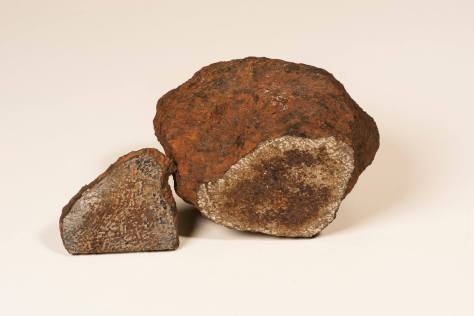 The freshly cut surface showed not only that this was certainly a meteorite, but an unusual one. Most iron meteorites are composed almost entirely of steely metal alloys and related minerals. Almost a third of this meteorite was made up of a brittle, bronzy iron sulfide mineral called troilite. Encased in the troilite was a silvery metal which formed dendritic crystals, similar in shape to a staghorn coral. The large amount of troilite is unusual in a meteorite, suggesting it may have come from the very edge of the metal core of a former asteroid. Its significance was important in the research field because it could provide important information about the distribution of chemical elements during the formation of planetary bodies. Only half a dozen sulfide-rich meteorites like this are well described in scientific literature. 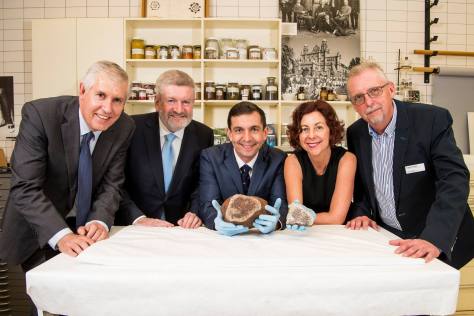 In the meantime, I have collected data which will soon be collated into a scientific paper, once I have bulk average trace element concentrations, essential for classifying the meteorite properly and possibly matching it up with one of the known groups that have originated from various distinct parent bodies.

The announcement of our purchase has stimulated interest amongst other fossickers, and a few other meteorites have since been found in the area and may be of the same type. In fact, they may all be parts of a single large incoming object that exploded in mid-air, and a small portion of one of these meteorites has been donated for that comparison. I am looking forward to obtaining the results soon – stay tuned for the findings! 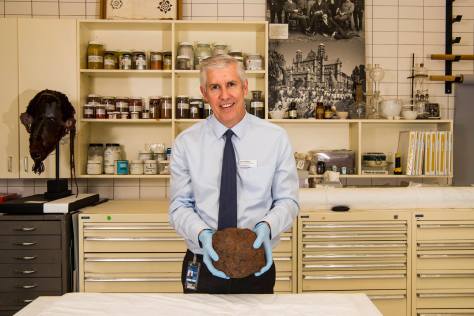 Meteorites are pieces of other planets or minor planets (parent bodies) that have landed here on Earth after being detached through impacts in outer space. Most come from asteroids that circle the Sun between the orbits of the planets Mars and Jupiter, although a small number have arrived from the Moon and from Mars.

Some of the parent bodies became hot enough during formation that their metallic components melted and concentrated inward to form a dense core of nickel-iron alloy surrounded by a ‘mantle’ of rocky silicate minerals, similar to the internal structure of the Earth. Others did not do this and retain the particles that formed them at the dawn of the Solar System. Those are the oldest known solid materials, condensed forms of the hot dust and gas of the early Solar Nebula before the Earth formed 4.54 billion years ago.

Studying meteorites through comparison with other planetary bodies that hold different histories gives us stories from further back in time than we could otherwise reach and allows us to better understand the development of the Earth.

Find a micrometeorite in your backyard

Chances are your house has been hit by a few thousand micrometeorites, and you’ll be able to find a few if you know the secret place to look, here’s what you need:

Method
1. Go outside and find the spillway of one of your house gutters. (There is normally a patch of dirt and somewhat rocky-looking debris.)

2. Use the spoon to scoop a small sample of this into the first Ziploc bag.

3. Take the sample to a good work area and empty it onto a paper plate. If the sample is wet, allow it to dry for a few minutes. Take the magnet and place it in the second Ziploc bag. This will stop small magnetic particles from sticking permanently to the magnet. Pass the bagged magnet over the dry sample.

4. Keep a look out for small rock-like particles “leaping” onto the bagged magnet. These little rocks contain metallic iron, not normally found in the soil, but a primary ingredient in most micrometeorites. Congratulations! You have discovered out-of-this-world rocks.

5. You can remove your micrometeorites from the outside of the magnet bag and store them in another bag or vial.